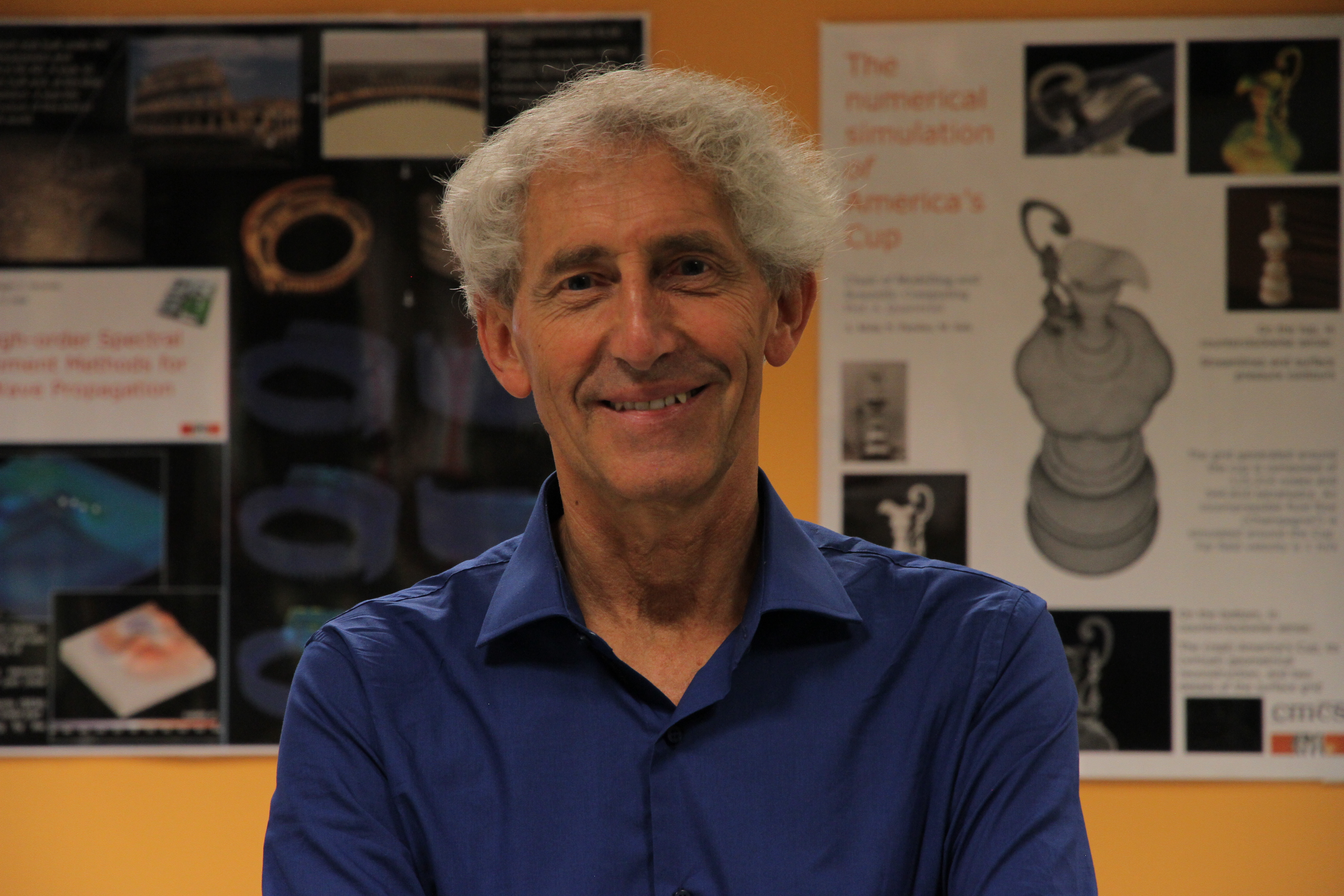 He has been Director of the Chair of Modelling and Scientific Computing at the EPFL (Swiss Federal Institute of Technology), Lausanne (Switzerland), from 1 July 1998 to 1 December 2017.

Among his awards and honors are: the NASA Group Achievement Award for the pioneering work in Computational Fluid Dynamics in 1992, the Fanfullino della Riconoscenza 2006, Città di Lodi, the Premio Capo D’Orlando 2006, the Ghislieri prize 2013, the International Galileo Galilei prize for Sciences 2015, and the Euler Lecture 2017.

His research interests concern Mathematical Modelling, Numerical Analysis, Scientific Computing, and Application to: fluid mechanics, geophysics, medicine and the improvement of sports performance. His Group has carried out the mathematical optimization of the early Solar Impulse (the solar energy propelled airplane), and the simulation for the optimization of performances of the Alinghi yacht, the winner of two editions (2003 and 2007) of the America’s Cup.

Abstract: Interface Control Domain Decomposition (ICDD) is a method designed to address partial differential equations (PDEs) in computational regions split into overlapping subdomains. The “interface controls” are unknown functions used as Dirichlet boundary data on the subdomain interfaces that are obtained by solving an optimal control problem with boundary observation.

When the ICDD method is applied to classical (homogeneous) elliptic equations, it can be regarded as (yet) another domain decomposition method to solve elliptic problems.
However, what makes it interesting is its convergence rate that is grid independent, its robustness with respect to the possible variation of operator coefficients, and the possibility to use non-matching grids and non-conforming discretizations inside different subdomains.

ICDD methods become especially attractive when applied to solve heterogeneous PDEs (like those occurring in  multi-physics problems). A noticeable example is provided by the coupling between (Navier) Stokes and Darcy equations, with application to surface-subsurface flows, or to the coupling of blood flow in large arteries and the fluid flow in the arterial wall. In this case, the minimization problem set on the interface control variables, that is enforced by ICDD method, can in principle assure the correct matching between the two “different physics” without requiring the a-priori determination of the transmission conditions at their interface.

Abstract: Mathematical models based on first principles can describe the interaction between electrical, mechanical and fluid-dynamical processes occurring in the heart. This is a classical multi-physics problem featuring multi-scale solutions in space and time. Appropriate numerical strategies need to be devised to allow for an accurate and computationally effective simulation of these processes in both physiological and pathological regimes. This presentation will address some of these issues and a few representative applications of clinical interest.

Acknowledgment: The work presented in this talk is part of the project iHEART that has received funding from the European Research Council (ERC) under the European Union’s Horizon 2020 research and innovation programme (grant agreement No 740132).

Reduced Order Models for Analysis and Synthesis of Complex Systems

Essential ingredients are the regularity and low dimensionality of solution manifold, the use of Offline/Online computational stratagems, the availability of a posteriori error estimates, and the use of low-dimensional approximation spaces.

In this talk I will recall the mathematical concepts behind Reduced Basis (RB) methods (a special family of ROM), provide both algebraic and geometrical interpretation, illustrate their properties of stability, convergence, exponential accuracy (under suitable regularity assumptions on the solution manifold). Finally, I will address some examples of applications involving both linear and nonlinear partial differential equations.