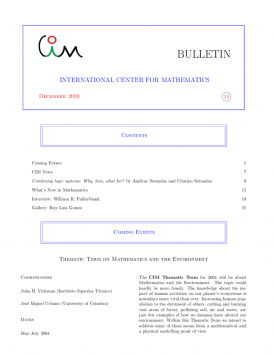 CIM Events for 2005
The CIM Scientific Committee will meet in Coimbra on February 14, to analyze the CIM scientific program for 2005.

Combining logic systems: Why, how, what for?
Amílcar Sernadas Cristina Sernadas 9-14

The practical significance of the problem of combining logics is widely recognized, namely in knowledge representation (within artificial intelligence) and in formal specification and verification of algorithms and protocols (within software engineering and security).

Largest prime yet. “MSU student’s prime number largest one yet” is a story by Sharon Terlep in the December 4 2003 Lansing State Journal. “Michael Shafer, a 26-year old chemical engineering student, made math history by discovering the largest prime number known.” Shafer did it by running a program that “hooked up... more than 200,000 computers world- wide.” The program had been running for 19 days when “an alarm sounded letting him know his computers tagged a prime number.” The number is a Mersenne prime (of the form 2p −1, where p is prime); in Schafer’s case p = 20, 966, 011 and the number itself has over six million digits. According to Shafer, “The num- ber itself really isn’t useful. What’s more important is what’s gone into developing the server and that the programs can get all these computers to work together for a common goal.” And: “There may come a time when there’s more important research that can harness this technology and use it for something more relevant.” Terlep’s story is available online; Largest prime number ever is found on the New Scientist News Service (http://www.newscientist.com/news/news.jsp?id=ns99994438).

Many of us have no idea as to how is the research environment in a private laboratory like the IBM T.J. Watson Research Center. Could you start by telling us about this research environment, in particular the one in the Department of Mathematical Sciences?

n early February 1953, Prof. Alfredo Pereira Gomes, at the invitation of then University Rector Prof. Joaquim Amazonas, came to Recife to establish a Mathematics Department in the Philosophy, Science and Humanities School, newly created at the UFPe. This was an at- tempt at following the example of the University of São Paulo (USP), which in the 30s had invited foreign professors, mostly Italians, to create departments in the basic sciences in its Philosophy, Science and Humanities School, keeping at the same time the tradition of teaching the exact sciences in the Engineering School. Shortly afterwards, and before the start of the academic year, Prof. Manoel Zaluar Nunes, at the indication of Pereira Gomes, came from Lisbon to Recife. At the beginning of the academic year, Pereira Gomes and Zaluar Nunes were also hired, at the suggestion of its dean and Mathematics professor Newton Maia, by the Engineering School, which traditionally had better students in the exact sciences, specially Mathematics.