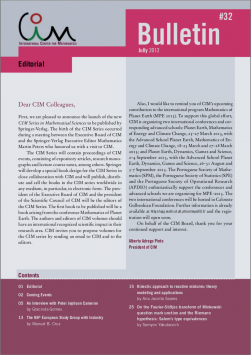 First, we are pleased to announce the launch of the new CIM Series in Mathematical Sciences to be published by Springer-Verlag. The birth of the CIM Series occurred during a meeting between the Executive Board of CIM and the Springer-Verlag Executive Editor Mathematics Martin Peters who honored us with a visit to CIM.

Peter Cameron received a B.Sc. from the University of Queensland and a D.Phil. in 1971 from the University of Oxford, with Peter M. Neumann as his supervisor. Subsequently he was a Junior Research Fellow and then a Tutorial fellow at Merton College, Oxford. He was awarded the London Mathematical Society’s Whitehead Prize in 1979 and is joint winner of the 2003 Euler Medal of the Institute of Combinatorics and its Applications, http://www.lms.ac.uk/content/list-lms-prize-winners and http://en.wikipedia.org/wiki/Euler_Medal.

The 86th European Study Group with Industry
Manuel B. Cruz 7-8

The 86th European Study Group with Industry took place from May 7 to May 11, 2012 at ISEP, the School of Engineering of Porto’s Polytechnic, organized by the Laboratory of Engineering Mathematics (LEMA) (see: http://www.lema.isep.ipp.pt/esgi86/). This meeting has counted with the participation of several experts with a large
experience in this type of events. By the 5th consecutive year, Portuguese researchers and academics tried to strength the links between Mathematics and Indus- try by using Mathematics to tackle industrial problems that were proposed by industrial partners (see: http://www. ciul.ul.pt/~freitas/esgip.html).

In this presentation we pay tribute to the work in analysis and analytic number theory of the famous mathematician Raphaël Salem (1898-1963). Precisely, we will extend his approach to study Fourier-Stieltjes coefficients behavior at infinity with singular measures. In particular, we will prove an equivalent proposition related to the known and still unsolved question posed by Salem in [8], p. 439 whether Fourier-Stieltjes coefficients of the Minkowski’s question mark function vanish at infinity. Furthermore, we establish a class of Salem’s type equivalences to the Riemann hypothesis, which is based on Wiener’s closure of translates problem.