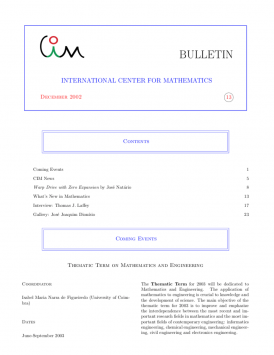 ERCOM
CIM has been for some years a member of ERCOM, a network of European Research Centres on Mathemat- ics.
ERCOM is an European Mathematical Society com- mittee consisting of Scientific Directors of the member Centres, or their chosen representatives. Only centres for which the number of visiting staff substantially ex- ceeds the number of permanent and long-term staff and that cover Mathematical Sciences broadly are eligible for representation in ERCOM. The eligibility of centres is decided by the EMS Executive Committee.

As everyone knows, Einstein’s Relativity forbids all material objects (or even signals) to travel faster than light. What is sometimes ignored is that this is a local statement: speed with respect to an observer can only be defined in a neighborhood of this observer.

“By relying on mathematical equations to describe the world, scientists for centuries have grossly limited their powers of explanation, asserts Stephen Wolfram” is the start of Richard Monastersky’s piece (Chronicle of Higher Education, May 17, 2002) on the publication of Wolfram’s long-awaited opus, “A New Kind of Science”. The book is described by Jim Giles (Nature, May 16, 2002) as “a call for researchers to turn away from cal- culus and other conventional mathematical tools ... .” What is to replace calculus? Since John Conway’s “Game of Life” (with roots in von Neumann’s work in the 1940s, but first brought to wide attention by Martin Gardner in the October 1970 Scientific American) we have all known that a cellular automaton can start from a couple of simple rules and generate patterns of amaz- ing complexity. Wolfram’s fundamental innovation, as best reported by Edward Rothstein (New York Times “Arts and Ideas” section, May 11, 2002) is to posit that such automata are actually at work behind the complex systems (turbulence, consciousness, the local structure of space-time) that currently baffle scientific inquiry. “Not only can complex designs and processes arise from the simplest of rules, but ... simple rules actually lie behind the most sophisticated processes in the universe.” And the corollary: some complex processes cannot be handled by scientific laws in the way we know them. “All we can do in such cases is discover the simple rules that give birth to the complexity. ... Everything else can be found only by ‘

Professor Laffey, please tell us about your formative years. How did you go into Mathematics, and what are your recollections of your university studies?

Professor J. J. Dion ́ısio was for years almost a legend to me. If my memory serves me right, I started hearing about him around 1957 or 58, and later I studied carefully some of his articles in the field of Linear Algebra. It was a time when mathematical research was almost unknown in Portugal, so to read papers by one of the few Portuguese active researchers was a stimulus to my imagination. I believe it was only in 1970 that I met him for the first