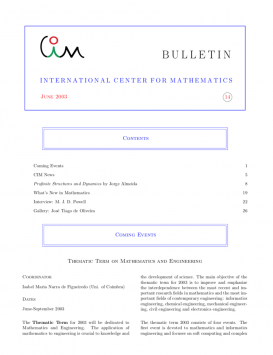 CIM Events for 2004
The CIM Scientific Committee, in a meeting held in Coimbra on February 8, approved the CIM scientific program for 2004.

Surprising as it may be at first sight, there are a number of connections between the theories of finite semigroups and dynamical systems, both viewed in a broad sense. For instance in symbolic dynamics, ideas or analogies from the theory of finite automata find a natural setting for application in sofic systems [10, 24] and, even though not usually formulated in dynamical terms, the dynamical behavior of various operators on finite groups has been extensively studied. The purpose of this note is to review some further connections that have emerged recently driven mainly by work on finite semigroups and thus perhaps open the path to new investigations in this area.

The Putnam in Time. “Crunching the Numbers” is the title of a piece by Lev Grossman, in the December 23 2002 Time magazine, about the William Lowell Putnam Mathematical Competition. “Every year,” it begins, “on the first Saturday in December, 2,500 of the most brilliant college students in North America take what may be the hardest math test in the world.” Grossman gives a quick survey of the his- tory of the exam, a summary of the daunting statis- tics (“the median score on last year’s test was 1 point. Out of a possible 120.”) and a Time-like glimpse of its mystique (“think of it as a coming-out party for the next generation of beautiful minds”). He interviews Leonard Klosinski (Santa Clara; the competition di- rector), Richard Stanley (coach of the MIT team) and Kevin Lacker, one of last year’s winners, who remarks: “Doing well on the Putnam and doing good math re- search are two different tasks that take two different kinds of intelligence.”

I am sure that our readers would like to know a bit about your academic education and professional career first. Why did you choose to go to the Atomic Energy Establishment (Harwell) right after college in 1959?

José Tiago da Fonseca Oliveira was an eminent statistician and university professor. His name is already registered in the history of the 20th century Statistics due to his important contributions to the development of the theory of extreme values. As a Portuguese scientist his name will remain forever associated to the recognition of Statistics as a science in Portugal.