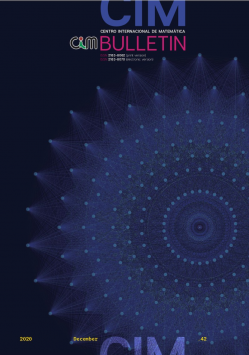 In March of 2020, a new direction board of CIM took office and the
editorial board of the CIM bulletin was renewed. The editorial board is
committed to continue the efforts of fulfilling the bulletin’s main goals of
promoting Mathematics and especially mathematical research.

The 1939 “ensaio sobre os fundamentos da análise
geral” (Essay on the foundations of General Analysis),
by the Portuguese mathematician António Aniceto Mon-
teiro (1907–1980), in spite of being awarded an import-
ant prize by the Lisbon Academy of Sciences, has been
unknown and ignored until its recent rediscover and its
facsimile publication. The ensaio is a 130
pages typed monograph that introduces mathematical
modernism and prepares a turning point in the mathe-
matical activities in Portugal, preceding the creation of the
Centro de Estudos Matemáticos de Lisboa in 1940, the first
Portuguese research centre, affiliated with the Faculdade
de Ciências of the Lisbon University and independently supported
by the Instituto para a Alta Cultura, the incipient national
science foundation at the time.

One of the biggest challenges in statistical physics is to understand phenomena out of equilibrium. A common  setting to model non-equilibrium dynamics is to consider stochastic  processes of Markovian type with an  open boundary acting on the system at different values, thus creating a flux. In these notes, we consider an  interacting particle system known in the literature as the symmetric simple exclusion process (SSEP) which is  connected to two reservoirs. We show how the algebraic construction of such Markov jump processes helps in  analyzing microscopic quantities used to derive macroscopic universal laws. In particular, we will characterize through its moments the non-equilibrium stationary measure.

José Agostinho Basto Gonçalves (born 28 January 1952) graduated in Mathematics at the University of Porto in 1975 and in 1981 he received his PhD degree in Mathematics from the University of Warwick. He returned to Porto and played a massive role in the creation of a scientific culture in the Math. Department, helping to instill a research-oriented mentality in several generations of students. His main research work lies in the scope of control theory and of the geometric theory of differential equations. He became Full Professor of the University of Porto in 1991 and he retired in 2008. Over the course of his career, he has supervised two PhD theses and has mentored a number of Master and undergraduate students. He was member of the first Scientific Committee of CIM (1996-2000) and member of the Statutory Audit Committee from 2000 to 2004. He has also been president of the northern regional direction of SPM.

An introduction to Analysis on Graphs: what are Quantum Graphs and (why) are they Interesting?
James B. Kennedy 29-37

We give a gentle introduction to analysis on graphs. We focus on the construction of prototypical difference operators on discrete graphs, differential operators on metric graphs, and the parallels between the two. The latter lead naturally to quantum graphs, metric graphs on which a Schrödinger-type differential operator acts, for which we finish by discussing a number of recent applications and ongoing areas of investigation. These are drawn mostly, but not exclusively, from mathematical physics.

André Neves is an outstanding Portuguese mathematician working in the U.S.A.. He has held research and  professorship positions at Princeton University, at the Imperial College of London and at the University of Chicago, where he is based now. He obtained his undergraduate degree in 1999, at Instituto Superior Técnico, in Lisbon, and the Ph.D. in 2005 at Stanford University, under the supervision of Richard Schoen. He works on Differential Geometry and Analysis of Partial Differential Equations. Among several  distinctions and awards, he was invited speaker at the International Congress of Mathematicians in Seoul (2014)  and was awarded a New Horizons in Mathematics Prize in 2015 for “outstanding contributions to several areas of  differential geometry, including work on scalar curvature, geometric flows, and his solution (with Codá Marques) of the 50-year-old Willmore Conjecture.” He also received the Oswald Veblen Prize in Geometry in 2016 (conferred by the American Mathematical Society), and was recently elected to the American Academy of Arts and Sciences. André Neves was the lecturer of this year‘s Pedro Nunes Lectures, with a seminar entitled: Counting minimal surfaces in negatively curved 3-manifolds, the first of this series which took place online. As in previous  editions, we took this opportunity for a short interview.