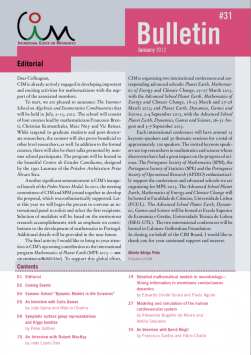 CIM is already actively engaged in developing important and exciting activities for mathematicians with the sup- port of the associated members.

Carla Gomes is a professor of computer science at Cornell University, with joint appointments in the computer science, information science, and Dyson School of applied economics and management departments. Her research has covered several themes in artificial intelligence and computer science, from the integration of constraint reasoning, operations research, and machine learning techniques for solving large-scale constraint reasoning and optimization problems, to the use of randomization techniques to improve the performance of exact search methods, algorithm portfolios, multi-agent systems, and game play.

A surface group is the fundamental group of a surface. In this article we survey some results on representations of a surface group on a real vector space preserving a symplectic form. We emphasize in particular some results which have been obtained using holomorphic and algebraic geometry, through the use of Higgs bundles and a fundamental result known as the non-abelian Hodge Theorem. Though this theory itself is rather involved, the results on surface group representations can be explained without bringing it into play and this is one of our main aims.a

Neurons are Nature’s solution to the problem of information processing and information storage. Nervous systems have been engineered by evolution to sense information from the environment, process this information and store experiences for the purpose of improving future decisions. Ubiquitous in all these stages is the necessity of information buffers. In the case of mammals, there are different mechanisms providing storage in a wide range of time scales: from the ephemeral facilitation of a syn- apse to the life-long memories of childhood

The use of mathematical modeling and numerical simulation to study blood circulation and related pathologies is an active interdiciplinary field of research. It has a great social and economical impact mainly due to cardiovascular diseases, that represent one of the leading causes of death and morbidity in industrialized countries

David Dingli was in Evora for the Summer School “Dynamic Models in Life Sciences”, where he presented a set of lectures called “Hematopoietic Stem Cells and Hematopoiesis”. In these lectures, he introduced the audience to the state-of-the-art in the dynamics of stem cells, and their relation to blood disorders. After the conference he gave this interview to Francisco Santos and Fabio Chalub, summer school co-organizers.